The Darcys announced their debut album and new tour dates 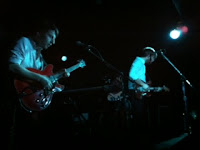 Toronto experimental noise rock band, The Darcys, announced a release of their debut albums. It is going to be a sequence of three album releases. The first album will be released via Arts & Crafts on October 25th. It is going to be available for free digital download at their official site and 180-gram vinyl will be sold only at GalleryAC.com and independent record stores.


The quartet is also heading out to the road with the album release. Toronto dates are October 13th at Lee's Palace with Malajube and Besnard Lakes and November 18th at Horseshoe Tavern.
They are known for a memorable show. This is what I described after witnessing their performance May 14th at Horseshoe Tavern.
They weaved their instruments together to form a quilt of sound - each stitch in the quilt more important than the last. The words meant so much, and the hooks popped up, as if out of nowhere - it left the audience feeling transcended from the traditional sense of an audience - it was more like we were witnessing something. Their music is not just a song with a few alluring choruses and random verses - for the Darcys, each song is a mean to express their deep thoughts... much like a painter using brush strokes to complete his composition; or how a poet uses romantic words to plaint another picture in the minds eye. Watching the Darcys; I didn't feel like I was at a rock show... I felt as if I was witnessing a completion of a work of art. It was truly beautiful.
They are worthwhile to see at a show. Check out the tourdate below!