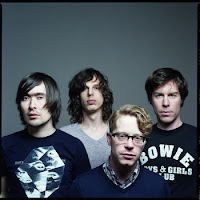 Sports is a Toronto buzzband, who recently released their self-title debut album. The album itself consists of a great mix of poppy tunes and psychedelic tracks, deriving from each band member, who also belong to various Toronto beloved bands, including the Carnations, Meligrove Band, and the Michael Parks. Listening to this album is like going to a All-You-Can- Eat restaurant, in that it fulfills whatever you could possibly want; from harmonic vocal, to thunderous guitar riffs and everything else in between.

Today's song of the day is 'Postscript Insane' from the album.
Their self-titled debut album, "Sports" is available for free streaming and download at a pay-what-you-want price via  Bandcamp site