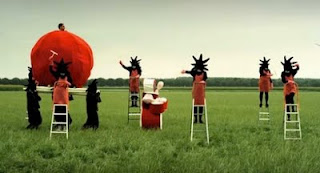 Another indulgence that you can look forward to by attending NXNE is the opportunity to take in music from different continents, especially from that indie pop/rock pioneer, Europe. Like Denmark's the Black Light White blazing the trail before them, Toronto will be welcoming another European band that you should keep your eyes on: Monokino.

The Amsterdam-based pop band has earned great recognition from Holland, Germany, and China. The trio has signed up with the largest Chinese independent record company, Modern Sky. At last, they finally put together a North American Tour this month, and will dropping by Toronto during NXNE. Their playful synth-pop tunes with high-pitched voice are their trademark. They set apart themselves from the rest of popular genre with distinctively danceable hooks reverberate in your head, which set adrift an influence of 80's electro and contemporary music. You would probably have a better idea of what I am talking about by listening to the below tune, "Something Strange".


Here is another song by the trio called " New Kid"!