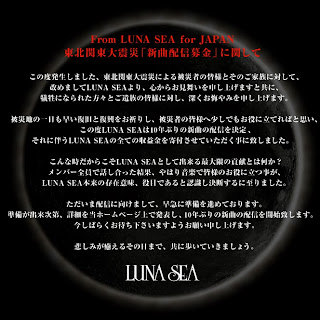 According to the official website, one of the biggest Japanese rock groups, LUNA SEA, has announced that they will release a new song. It's been almost 10 years since their last single. All the proceeds earned from the new song will be donated to those who suffered from the earthquakes/ tsunamis in the Northern East region in Japan. The band posted a new message on the main page of the website this week. The below is the translation of the post (from their official Myspace).  No specific release date was further noted, yet, the new song is highly anticipated among their fans. I can't wait to see what Sugizo, who is also a member of X Japan, will contribute to the song after the tremendous experience with the North American tour in 2010. Don't also forget to read Kanae's post about what we can do to help them throughout Canadian organizations.

About the "New Song Download Fundraiser" for Tohoku-Kanto Earthquake Relief
We, the members of LUNA SEA, would like to once again express our sincerest sympathies to all the victims and their families affected by the Tohoku-Kanto Earthquake, and also would like to extend our deepest condolences to those who sacrificed their lives and their families.
As we hope to contribute to a fast recovery and revival of the damaged areas, we have decided to make a brand new song in 10 years available for download in which all of the proceeds of LUNA SEA will be donated to earthquake relief.
What can we contribute as LUNA SEA in a hardship like this?
After a thorough contemplation, all the members agreed that we shall generate support through music because music is the reason of our presence and our lifetime mission.
We are preparing the new song now and trying our best to bring it to you as soon as we can. We will update the details as soon as they are available on our official website. We ask of your patience until the new song is ready.
Let's walk together hand in hand until the day this tragedy is healed.