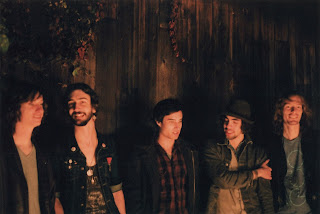 Dinosaur Bones is one of the most anticipated young Toronto bands. Their sound reminds me of Radiohead's, with its moody melodies and rhythms, but they have their own freshness to them.  I am looking forward to see them in the future, after having missed their show last weekend on January 29th at Mod Club.  They just announced the release of their debut LP, " My Divider" set to come out on  March 8th. It contains 11 tracks according to AUX TV:

If you are like me, who is regretting not attending the show last weekend, do not despair. The quintet is playing again for the Canadian Music Festival on March 11th at Lee's Palace - followed by an EdgeFest show on July 9th at Downsview Park.

Here is one of the songs of the album. "Ice Hotels". Enjoy!