The Dears- live performance at livestream.com 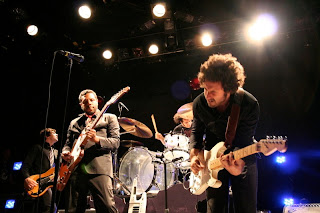 It's always nice to see the trend when big indie bands take advantage of technology to share their live performance on the internet. The Toronto-based rock giant, Broken Social Scene, has recently streamed their live show at Terminal 5 in New York City, January 18th, and made it available on the internet for fans to enjoy.


In addition to an internet available live performance, the creative alternative quartet, Ok Go, also sells a USB flash drive, which is loaded with a live recording of the band performance at each show. This USB flash drive can be purchased right after the show at a merch desk or from their website later on. These options enable more fans to watch and experience the live performance


Another band who has taken a step further with sharing their live performance on the internet is the Montreal psychedelic rock band, the Dears. They have set up a channel at livestream and they have been streaming their live show every Mondays from 7p.m (EST).
The channel is constantly streaming their music videos, rare tracks and sessions if you miss the Monday live shows. There are only one episodes left! (Feb14th) If you haven't seen any of them before, don't worry about it you can still watch full past episodes from the channel as well.