As Tall As Lions to call it quits: A farewell tour in Dec 2010 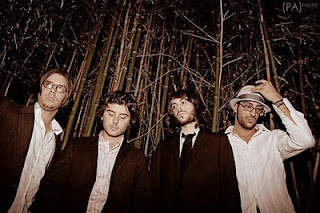 As priceless as the joy of discovering a new awesome indie band is, there are also those heart-breaking moments of finding out that a band is calling it quits. 2010 was a year with full of these sad occasions. It started off with the break-up of 'Copeland

' in March, then continued with 'Lydia

', an Arizona-based ambient indie band that decided to go their separate ways. Some band members even departed on their own paths before the final tour in August. But you know, the rule of three often applies. It was so devastating to find out one of my favorite NYC based groups, 'As Tall As Lions

' is going to follow suit and disband. I only recently found this out when the band posted a picture on their Facebook and a number of comments by its fans stated how sad they were. After doing a little bit of digging on the internet, here comes a heart breaker... I found a farewell message from the members.

This is such a shame. The coherence of their sound is nothing short of extraordinary: A steady percussion marches through their trumpet and keyboard melodies. It further evolves with the vocals - the voice of Dan Nigro, (vocalist/guitarist) provides a lyrical sparkle accentuating the beautiful sounds backing him up. Their songs draw you in and easily evoke emotional responses that linger. I still recall how impressed I was when I first saw them opening up for the experimental rock band, Mute Math

in New York in last November 2009.
'As Tall As Lions' is continuing their farewell tour in the U.S until the end of this month. Unfortunately Canadian folks are not able to share these last moments with the band. But as stated in the farewell message, it is not a sad departure and we can still be there in spirit. I am looking forward to seeing what the band members go on to do as individuals and will make sure to keep you guys posted.
Posted by Unknown