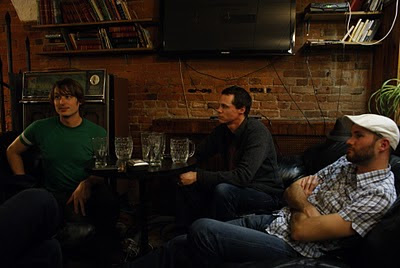 Ladies and Gentlemen, Here is the last part of the Escalate! interview!


B: Was it always a goal to be an instrumental band, or did you ever experiment with adding vocals?

All: ahhh hahahaha (giggle),you just opened a can of worms!


B: As soon as I said it, I knew it was a great question! lol

G: We tried a singer once. This was from when we were still really, really jam-based musically. We met a girl through friends of friends. She was an actress and singer. She kinda let on to us like she was like an improv-jazz singer. And we thought it would be kinda cool and it could be an interesting thing, right? Reheasals weren't bad and obviously it was very jam-based and we didn't know exactly what the performance was gonna be. But the rehearsals seemed like it was moving in the right direction.

B: Some members remember more than others haha

J: Well, one or two songs were pretty good. There were moments, moments that we were gonna be OK.
G: But when played this show we only had her for three songs or something.

G: It was long before the first album. Anyway, she got up on the stage and did three songs - then something came out of her; we had no idea what she was doing. At rehearsals it was fine! The music was really acoustic piano-based and we were plaing this really pretty song and she's saying stuff like"Fuck you your dad" and "I hate you" and we were blown away.

G: we got a bad taste and we never spoke to her again - it just didn't work out. She just had a differentmentality of what should happen.

B: You guys just had no idea that was coming. What is the weirdest show that you guys played?

G: We used to play there around 2005 - the stage had a stripper poll right in the middle. So there is nowhere to move!!! But we only ever played to between two to five people and we usually knew the half of them at least. And they paid us handsomely to do it. It was weird but we just went with it.The best thing about the Bang Bang Bar was that the owner used to call us all the time as "Esca latte"
All: ahahahahahahaha
G: All the time. As it over the mic too, He would be like " Lady and Gentlemen, Esca Latte"

B: Have you guys ever tried to correct him?G: After being corrected, he thought what we were saying was:

J: It's funny because when we corrected him after that it wasn't "Esca lade", he introduced us as "Esca Lado"

B:"Esca Lado"!? ahahaha
G: And it didn't really matter cuz there were only 5 people anyways.

J: Last Saturday.
G: You think so? That was one of the good time.

J:Well you know i think the pedestrian Sunday is ongoing and its been pretty a few. There was one time that, I only remember this retrospectively, but obviously i was pretty nervous or so, but there was one time that we were playing and there is a rip-off overhang on the place next to the Embassy and its gone now. But it got much smaller now, but it used to overtake the whole thing like the big entire Embassy patio and one day, it supposed to pour rain, well this shop was closed, so "let's set up in front of it and we will play." And if it rains, we can do whatever it takes, I remember someone saying that, I dont know which song we were playing , they said that whatever you are playing however you are playing it, there was a storm rolling in it we just kept and the sky was getting darker and darker and the storm more and more intense as we intensified. And it hit really loud and it just sounded like phhhhhhhh and it was just like they were like really really like uncontrollable to the intense. And I kinda remember playing being like " so fucking wet" there were literately just 8 people watching and they were like "holly fuck what is just happening right now!?" they thought we were like in control of the storm or something.


B: When you stop the song, the rain stopped?

J: Yeah, magical stuff happened at this event.
B: One final question, one word from each or you. what's "Escalate?"


Thank you Grant, Jordan, and Tylor, for taking time to have an toasty warm interview with us!!
Posted by Unknown