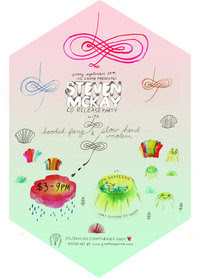 It was an invitation from a band called the Hooded Fang. I have liked the Torontonian band since I first saw them opening up for The Rural Alberta Advantage at the Horse Shoe Tavern. It was about a year ago, but I still remember talking with my friend Matt; sipping beers at a table at the venue how great they sounded compared to the other opening band. (Unfortunately I cannot recall the name of the other band) I especially remember how fun they sounded.
Once I got home from the gig, I "liked” the band page on Facebook, and since then I have been getting any show notifications from the band. I had not had an opportunity to see them again (somehow there was always a schedule conflict) So when I got a notification a week ago, I told myself that this time I would LOVE to make it and see if I can really dig in their music. But I found that they are opening for someone else.... named Steven McKay. Wait a sec… a thought occurred." If I don't like this guy's stuff, it's not worth it"

So I started checking his stuff on My Space. His music is a bit different from Hooded Fang. Conversely, I liked it immediately I initially heard of a song called "Slow Down" I wanna know where they shot the video!! It looks very familiar to me. The tune is very relaxing-the best kind of music to listen to Sunday afternoon with your favourite coffee or tea :)


I checked out some more stuff on YouTube. His music is not constrained within the Folksy pop music, but there is some songs that reminds me of Casanova or even something closer to Hawaiian music. He has a new CD coming up. I don't know many details about the new CD. However; the show with Hooded Fang at the Garrison this Friday (September 17th) is the CD release party and the cover charge is only 3 bucks!!!. Did I hear that right? Yes you did! Only 3 bucks!! The show starts at 9p.m! Moreover, according to the Facebook message that I have received, there will be a BIG, CRAZY cake!!!!! I have such a sweet tooth!!! I have to be there for sure. The details of the show can be checked by Clicking here

So it is not too late, clear up your entire schedule on Friday night and join Steven McKay and the Hooded Fang's show! I will be there! So if you find me, don't hesitate to say, "Hey, what's up Music Psycho?!?!!!" :)
Here is another song by him called "Andy's house" Enjoy!