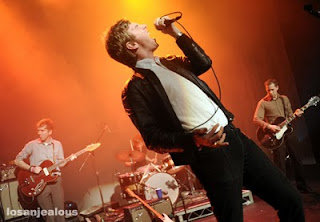 So let's get started with the Top 10 performance reviews of the Lollapalooza! The number 10 is (da la la la la,, (drum rolls..).... the Walkmen!
I have missed a couple of their last few shows here in  - so I was pretty excited to see them, but I wasn't sure if my schedule will match with everyone else I was with. It was my biggest concern of this trip. Somehow it worked out very well!
My favorite solo artist/producer - Butch Walker - even said in his blog that; "The Walkmen are one of the most underrated indie bands out there." Despite the fact that not too many people know about this band, the last couple of shows in  were sold out. I still think that  is one of the best places to check out indie music. We have great taste in music :)
I expected the stage to be fairly empty. To my surprise, the stage was PACKED. They played on Friday between 1p.m to 2p.m. It is fairly early for lots of people to get started. On the same day, there were Lady Gaga and the Strokes on schedule from 8;30p.m... but then I realized that most of the people around the stage were to see Lady Gaga. Seriously guys. Seriously? I heard from our tax driver that some people had been lining up for Lady Gaga from 9 in the morning - the doors open from 11a.m.... and she starts at 8p.m! Seriously guys – seriously!?
Being surrounded by so many people made it hard to pay attention to the stage and I was very far from it, too. However, the tune from the stage made me very happy as I was finally able to "see" (I should say "listen to") the band. They sounded very solid and clear! I just loved how good the leader singer sounded. His voice is something very distinctive. It would have been nicer to see them closer and with more sophisticated crowd - so that is why the band is NO. 10!
Fortunately, The Walkman is coming back to  on October 9th at the . I am definitely going to check them out! You can check their show schedule from their My Space site ( click here)
Here is my favorite song by the band, "We've been had"
Enjoy and stay tuned with the rest of the ranking!