Before reading this post below; please, please check out the video. 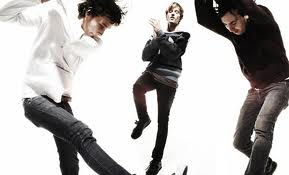 "Lights and Music, on my mind… Be my baby........."
See, I told you! This song is so catchy that once you listen to the song, it will cause a stuck tune syndrome for a while. No. 7 from the Lollapalooza top 10 is Cut Copy!
I didn't know much about the band till the Lollapalooza playlist in the car ride to . Immediately after listening to the song I was curious to see the band. Frankly; I didn’t care about their performance as it is not typically a type of music that I listen to. I thought it is catchy but way too poppy for my taste. But I didn't have anybody else that I really wanted to see at the same time (Do I really care to see Green day? Probably not.. right?) So I stayed with my friends and decided to check out Cut Copy.
Cut Copy started off as a solo DJ/song writing project by the lead singer, Dan Whitford. The band has evolved its structure of the band, adding bassist/guitarist (Tim) and drummer (Mitchell). They have gained popularity over the last few years with the release of their 2008 album, followed by extensive touring all over the world in 2009

The performance by the band was fun as I expected – but what made it more fun was the audience. Everyone was bouncing around with the fun music, including myself. I think I danced the hardest during their performance during the Lollapalooza.
There was also a guy right in front of us dancing around and I think he was trying to dance with young girls, which made the show even more priceless.
Just before the show, I bumped into my friend from . (Yay Brad!!) I knew he was coming to Lolla, but never thought I find him amongst the 80,000 people in the park. So being extra happy to see a pal from  as well as my road trip crew; I danced like a penguin!
What has made me laugh is a comment by my friend about the lead singer’s hand shaking moves during the song. I’ll post a couple of songs from their Lollapalooza performance just so you know what I mean lol
Here is one more! Almost half way done with the reviews! Thank you so much for keep reading and stay tuned with the rest of the ranking :)