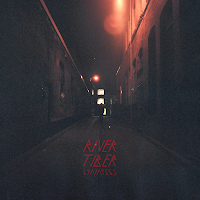 Happy New Year everyone!!! I am so excited to share my new discovery with you all today. It is a Toronto based experimental electro band, River Tiber (River Tye-ber), who have released a new album Synapases on January 1st, 2013 and it is available for a free download. I saw the link posted via Twitter by the fellow Toronto singer songwriter, Craig Stickland this afternoon. When a stellar musician recommends others, it's definitively worth checking.

This project, River Tiber was initially kicked off by this young gun, singer songwriter, producer and multi-instrumentalist, Tommy Beesley back in 2010 and eventually elaborated on it to the form a band with his fellow musicians with their impulsive avante-garde electronic tunes, which you can explore in their new effort, Synapases. It is filled with innovative and fresh melodic magic, which give a scent of M83.

My favorite tune is the last song of the album, What Are You Afraid Of, which was also a first song unleashed from the album. It leaves the listeners on a mesmerizing trail of quixotic fusion between thrilling beats and facile echoing vocal. The voice whispers the line, What Are You Afraid Of, and as the song proceeds to the end, I became withdrawn into the song more and more.