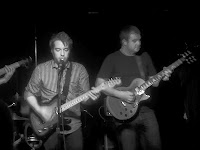 After a two year hiatus, Toronto rock band, Here Below gradually set themselves back on track with a CD release and live shows since late August. It was a stellar start-off to my thanksgiving long weekend as they delivered a promising show at Cherry Cola on October 5th, 2012.

The venue was rather quiet upon my arrival as most of the nine-to-fivers had one more day to go until their long weekend. However, I started spotting a couple of wanders who were there with a hope to chat with Jack White after his 2 Toronto shows. (Note: there was a rumor that White always hangs out at the bar when he is in town.) Instead, they were in for a good treat - indulging themselves with local bands.

As soon as the Incubus-reminiscent tunes flew into the venue, the audience gathered around the stage. Each member of Here Below crafted copious amounts of musical detail with their instruments and maneuvered them well to draw a musical painting in the air. They're an infusion  of lots of genres including jazz, metal, alternative rock, and more. It was very a very thoughtful performance. I found it enjoyable to be completely soaked into their comprehensive melodic compositions.
Posted by Unknown