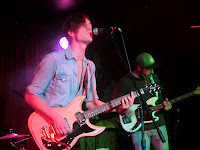 One of the best hosts of the local music scene, the Silver Dollar Room knows who to put on their bill. This Saturday night, on September 15th, 2012, they put together a stellar line up with Toronto locals, Invasions and Stray Feathers and Toronto first-timers, Loose Pistons from Montreal.

Montreal garage rock quartet, Loose Pistons, started cranking up their volume on the amps prior to their performance. Once the drummer, Pierre-Luc Boily indicated 'go' on the volume, they commenced their set with their 60's garage rock tunes. I could certainly feel the nervousness from them as it was their debut show in Toronto. However, as they proceeded with their songs, it disappeared immediately and the audience started gathering around the stage.

Their captivating bluesy rock tunes grabbed my attention from the very beginning and caused a stuck tune syndrome. I found myself deeply immersed in their style of the melodic simplicity. I always find it very attractive when a band knows who they are and Loose Pistons are definitely a band with a strong self-identification with a simple yet solid dynamic to their sound. My favorite tune of the night was Break a Bone, which the lead singer/guitar, Hugo Chartand, rocked out his harmonica to a bluesy rock tune. My heart melted when the harmonica met the hauling guitar solos. I got a cassette EP with a download card from the band at the end of the night, and it's been on heavy repeat over the weekend.- The best five bucks that I've spent for a while. 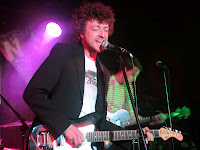 Following with the staggering performance by Loose Pistons, Toronto local, Invasions escalated the momentum of the night even further. Their audience showed up around the stage and it became the busiest during the night before they hit the stage. Once they put up a their logo on the back and a flashy little skeleton on the drum set, the Toronto rockers were ready to blast the audience with their newly written songs, which they've now channeled their musical path to Western surf rock. They've also introduced two new members, Brian (same name!), on the bass and trumpet. The astral trumpet tune certainly spiced up the mood of the sounds, which caused the audience to sway along with the melody. The new direction of their 60's mellow surf rock tunes initially stuck me like thunder as I'd expected more poppy garage /surf rock tunes from them. However, I was fond of this new face of Invasions. All the songs seemed to be concentrated together and they triggered uniqueness in their sounds.

At 2:30 A.M after the show, I found myself not being able to sleep from the excitement I had witnessed - such a boisterous show and I stayed up late trying to find out more about them on the Internet. Hats off to both bands who made my Saturday night.
Posted by Unknown