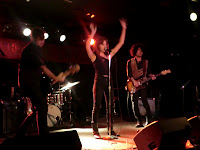 As I was at CNE earlier that day, I had the dilemma to choose between the free Big Sugar show and this local show at the shoe. I'd missed a few chances to see the Lost Babies in the past few months and their new demo really impressed me with their captivating melodic verses, which are right up my ally. Thus, I headed to their show just in time and I do not regret my decision that night at all. In fact, I knew it was the right choice once they commenced their set.

I am not gonna lie that I was, at first, a bit intimidated by the front woman, Valerie Messy's stage presence as she shouted at the audience to get closer to the stage. However, as they proceeded to steady rock n' roll tunes, I was immediately in the world of the Lost Babies. Messy rocked her heart out with her ethereal voice and bold and charismatic presence on the stage, and it reminded me of Cherie Currie of the Runaways and a bit of Karen O of Yeah Yeah Yeahs, all these great front women who know how to rock.
Despite having such a strong presence by the front woman, my eyes and ears weren't only stuck by her. Solid drum beats supported and controlled the tempo of the songs, where they cheekily alternated the tempos in songs. The gravity of songs shifted from one to another and immediately escalated its speed and stopped all of a sudden. Their timing was impeccably tight among all the members. The mesmerizing guitar riffs further invigorated the melody lines, while implanting the hooks in my head.  As their performance carried on, I found myself getting closer to the stage gradually.
A band like The Lost Babies keeps me wanting to go to shows with a hope to catch something so thrilling like this set.
Posted by Unknown