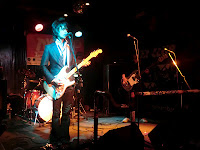 One of the advantages of attending NXNE is to witness various acts from all over the world. The only Japanese attendee of this year's NXNE, FU, took over Bovine Sex Club on Friday, June 15th.

Politely introduced themselves to the audience, the front man Quitous Ubi, all of a sudden, bent over backwards, while shaking his hands as if he was possessed by someone/something. Once he reached the status of 'unconsciousness', he took a deep breath and sang, On No Words,  from the bottom of his lungs with his operatic singing style, which took a number of the audience by surprise.

Between songs, Ubi kept kneeing on the ground to further charge his mystical power, while the drummer T*K and the bassist, Tekere built up the foundation of the song with their solid rhythms. I was hypnotized by their innovative melodies and unique singing style. I have not yet seen anything like this before.

I also think it's worth mentioning that I first encountered the band members at registration on Wednesday while I was working on my day job. I was impressed by the fact that a band from Japan registered for NXNE, promoted and arranged all the travelling, all by themselves. They probably incurred all the costs themselves too. In a country that they don't know many people and in the language that isn't their first language. I've met or seen a number of bands from Japan, yet all of them were here with help of others. Kudos for trying to spread their music by themselves in different countries.  I was moved by it!