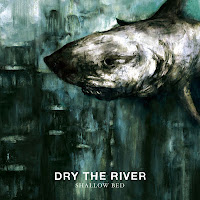 London based folk rock band, Dry The River have been on my radar since SXSW. It is not an over exaggerated to say that they are the hallmark of the current sentimental folk scene. Their debut studio album, Shallow Bed,  was finally unleashed in North America today, after the UK release on March 5th and their first tour in this continent. They've worked with Peter Katis (a producer of Interpol and The National) to compile a collection of 12 tracks, which is full of aesthetic melodies and layers of harmonies, enchanted with nostalgic string verses.

Their songs, including History Book and New Ceremony gradually expand its the tension, while building its momentum with Peter Liddle's angelic vocals. It leaves me with an orchestral feel at the end of the song and a tide of emotions. If you like Fleet Foxes and Midlake, you should check them out.

Currently, Spinner is offering a free full album listening on their website. Keep your eyes on this band!