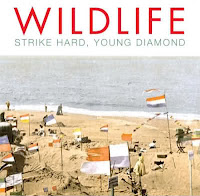 Who doesn't like a rival fight? - Especially when a group of hipstars is beaten up by an awesome band?
Toronto power rock quintet, Wildlife have released a new video, Sea Dreamer, from their debut album, Strike Hard, Young Diamond. It includes TTC trains, street bowling,  horse mask, gear breaking and rival fighting.-exciting. But more importantly, the energetic vocal resonates with striking guitar riffs and alluring synth beats, which electrify listeners drastically to jump on the bed, while the sounds swell up to a spark of vigor. The only way to release the tension is probably to see them live.
Wildlife is known for lively and sweaty performances. Our next chance to witness them is at Lee's Palace on March 22nd. Get ready for an early spring sweaty night!!!