The Holiday Crowd, Over the Bluffs 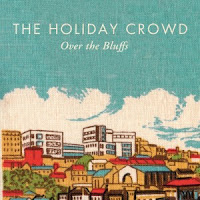 The album which I've been listening on repeat this week is, Over the Bluffs, the debut album of the Scarborough pop rock band, The Holiday Crowd. Since 2004, the band has crafted seams of melodic tunes and finally put together the best pieces in this debut album, which was released on January 24th. This new record will take you on a time trip back to 85's, reciprocal reminder of the Smiths
The Holiday Crowd also unveiled a 8mm music video, Pennies Found off the new record. They are celebrating the release at on Friday January 27th at Oz studios, (134 Ossington Avenue)
Posted by Unknown