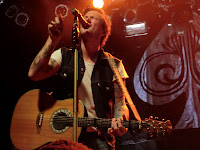 The moment that I finished reading 'Drinking With Strangers' by Butch Walker, I went to my bed room to find my little box with all the ticket stubs from the shows that I've been since 2005. The very first show was The Killers at Molson Amphitheatre in 2005 with my ESL fellows, Shuta from Japan.( This year, I went to Barrie to see Green Day with him, too) Then, I found this ticket slip-March 5th, 2009, Butch Walker at Lee's Palace, which I was looking for.

Things were very different for me around the time. I was in school trying to finish my study at Ryerson. What I studied and what I knew was accounting, tax and number crunching, spending most of my days in the library. While I was still listening to some indie music when I studied, I hadn't been to the show for years.( The last show before was V-fest in Toronto island in the summer of 2008, when Noel Gallagher got assaulted on the stage...) It was also the same time that I got to know Bryen, too. After being influenced by him, I was so eager to go to any shows with him. I remember the day I got the ticket at the last minute at Sunrise records at Yonge and Dundas for this singer songwriter from the states, Butch Walker, who has a DVD of his live footage in Japan. Bryen convinced me to join him and Danielle for this show and told me to check out his music from his previous album, 'Letters.' I ran to HMV, but all the stuff that I could find for Walker was his new album at the time,' Sycamore Meadows', which became my favourite record of his work, The show was a wake-up call and indeed very special to me still to today. I rediscovered my passion for music and Walker's songs became my root songs. I've interpreted the lyrics with my own perception and with my past experience and I had numerous occasions that his songs saved my days. Anyways, enough about how much I love Butch Walker...
This bibliography by Walker was a mind opening experience for me- He shares the details of how the music industry, back in 80's, 90's and even today, works, his personal life along with his struggles and achievements with his career and the crucial reality over the pie split among different parties and the share of 'publishing rights.' He repeatedly says in the book that "There is a difference between a good song and a hit song.", which is something to note from the book. I often hear this from different people- "This artist/ band is underrated." I used to use the phrase all the time after finding any good local bands and talking about them on my blog. But this book actually made me realize that there is no such thing as 'being underrated.'-Music is good as long as you can relate to it or if it makes you excited or emotional in any different ways and if you remember the song over decades. In that sense, Walker's work is definitely good music to me.
My favourite part of the book is when he talks about lyrics from Sycamore Meadows, which I would say is the most personal album that he has released to date. It was surprising to know the background stories of some songs.
If you have some spare time or like to know the insight of the music industry, this is the book that I would like you to grab.
Posted by Unknown