Click here to read the Part 1 of the interview with Ben Caplan.


Kanae(K): The song, "Stranger" (The below video),  is very different from the rest of the songs in the album and you put it at the end of the album, right?


Caplan (C): It's where my writing is going. The stuff that I've been working on now is more leaning toward the direction.- More klezmery, waltzy, dirty kind of stuff.
C: I wrote it when I was just walking across the McDonald Bridge in Halifax. It's a funny story. I was having the best day ever. I was just feeling really really good . I was concerned about this because I write songs when I don't feel good. My songwriting experience is kind of the moment of catharsis that getting something out. But I was feeling so good. I felt loved and respected, and there is this community of people that I love around me, This is terrible, and I was like I am not going to write a song ever again. And I started thinking, while walking across the bridge, feeling good, the sun baring down and the wind blowing through my beard ..."What if instead of a perfectly content twenty something white guy in Halifax, I was this miserable misanthropic really old Eastern European guy. What's the song that guy writes." And I started ripping off the idea and I started running home instead of walking ,and I didn't have a piano at the time and I just had a cheesy Yamaha organ. And in two and half hours, the song was finished.

Nick(N): The video of the song is very interesting. Is that in Halifax?
C: No, it was in Hamilton actually. We just show up in a bar.
N: Coz some people in the background were like, what was going on?
C: Yeah, so we just walked into a bar, Me and Mitch Fillion from Southern Soul. We walked in and said "Hey, we saw a piano here and we just wanna see if it's tuned. Do you mind if we check it." So we played around for a bit. It wasn't perfectly tuned, but close enough, so we asked  if they don't mind us shooting a video here. They gave us a bunch of dirty looks and we thought they were about to say no, but the bartender said "You gona buy a beer?"  and we said "Yeah, we'll totally buy a beer." and he said "Then you do whatever the fuck you want."
N: Good old Hamilton hospitality.
C: Exactly, So we set up a bunch of recording gear and turned on his camera, and we just did it in one take and that was that.
K: After the tour here in Canada and Europe, do you have anything planned after that?
C: Yeah, I am in the second or third week of the 4 months tour. As soon as coming back from Europe, I am playing at Halifax Pop Explosion and I have the whole week and half off. I am so excited, but I don't know where to sleep because I just rented the apartment.
N: Oh so you moved out from your house then?
C: No, I am just subletting it. I live in sort of an art-collected house in Halifax. We host lots of house concerts and have a weekly open mic there. It's actually the most popular open mic in Halifax. We usually get between 60-100 people a week. The list and performers opens up by 9 p.m, but it's full by 10p.m. It's great. I have no intention of leaving the house yet. I just built the stage in the backyard in the summer and I am ready to use that in the next summer. I just sublet my room to another musician.
C: After that, I'll start touring with Charles Ernewein in Quebec and Ontario and the tour will end at the end of November. And I am heading to the West with a bunch of punks. I will be touring with a bunch of dirty ass punks. They actually live next to my house. I am just gonna hop on the bus with them to head to West and tour across prairies. 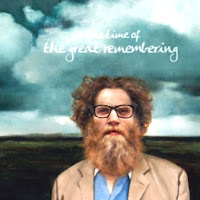 Thank you so much Ben Caplan for your time. After the lovely chat with him, I witnessed his performance at Drake Hotel. Stay tuned for my show review.
If you have missed his show on this Wednesday, don't worry. He has a secret show on Sunday, September 18th at the Press Club.
His new album, "In the Time of the Great Remembering" will be released on October 18th. Meanwhile, you can pre-order the limited edition with transparent viynal with digital download of the album. Click here to check out the details.