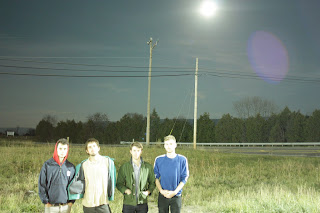 When I walked into a fairly packed venue on Wednesday night called the Garrison, the first band had already set up their gears and was ready to ring a bell on the stage. They were from Montreal, known as 'Pat Jordache'.


As soon as their first stong reached my ears, I couldn't help thinking that they are reminiscent of another noise pop band, Matters (aka D'urbervilles). Yet, what distinguished them from that band was the breakneck beats from two drum sets. The louder the drum beats became, the more eyes from the audience were glued on the stage. The momentum had escalated with continued fun beats as the Montreal noise pop outlets thrashed away at their instruments. Overall, I was glad to make it to the very first act of the night as they were worth seeing live.
Posted by Unknown